Not having a readily available solution available put me on the path of figuring out whether a more system-wide “killswitch” might be lurking somewhere. Most Mac Admins dealing with network volumes are likely aware of the setting to disable the creation of .DS_Store metadata on network volumes, but no similar setting to control network volume indexing was documented as far as I could tell.

To have mds ignore all external volumes including network volumes run the following command:

To be able to re-enable indexing for certain external volumes, run this command instead:

Some poking around turned the attention to mds by way of /System/Library/LaunchDaemons/com.apple.metadata.mds.plist which invokes the mds binary at boot time. Next step was to open the executable in everyone’s favorite disassembler Hopper in order to see what we could see. I’m by no means a Hopper pro so I will typically perform some initial “Labels” or “Strings” searches for terms that are of interest. In this case I went with the generic “Preferences” query to get an idea of how and where mds might get and set its preferences. That initial search turned up some decent results as seen in Figure 1.

Working in Hopper involves quite a bit of following rabbit holes down dead ends so I won’t bore the reader with the results of following each of these results into the decompiled code but eventually I came across a rather apropos block of pseudo-code courtesy of Hopper’s handy pseudo-code generator as seen in Figure 2. 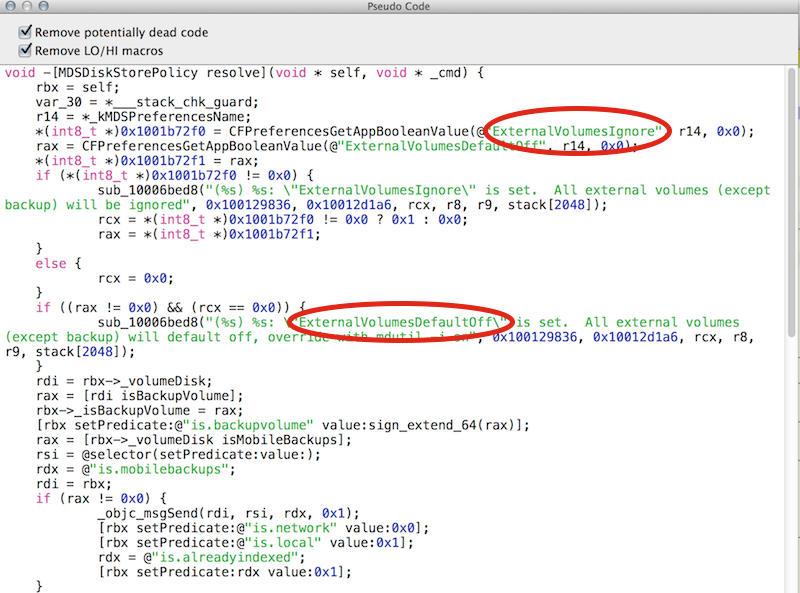 “ExternalVolumesIgnore” is set. All external volumes (except backup) will be ignored

“ExternalVolumesDefaultOff” is set. All external volumes (except backup) will default off, override with mdutil -i on

Excellent. Those two keys would do very nicely in our quest to squelch the network-intensive file indexing by Spotlight. At this point it appears that the “Ignore” version of this preference concerning external volumes is the most irreversible and all-or-nothing one, while the “Default Off” version implies that the user will still be able to opt certain volumes back in should they wish to. For example, direct-attached storage devices like USB or Thunderbolt drives would not be indexed by default with the “Default Off” preference but the user would be able to enable them by running mdutil -i on /Volumes/MyExternalDisk from the command line.

With a good selection of prospective preference keys in hand the next step was to figure out where mds and/or Spotlight actually look for them. As a Hopper apprentice I usually start a search for possible preference file locations with a string search for “.plist” as seen in Figure 3. 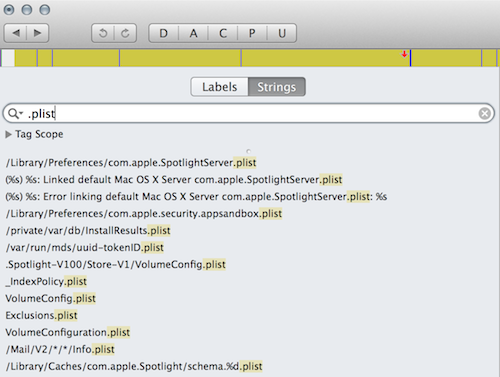 There are some good leads here, but it would be better to figure out exactly which of these plist files (or another one entirely) is where we’d want to write one of the two candidate keys to for testing. Through a little bit of crowdsourcing of opinions with the Mac Admins Slack team and especially the help from @frogor aka Mike Lynn in the #python channel I was able to determine the correct file. In an earlier search for “Preferences” I also found a reference to the kMDSPreferencesName variable which is used in direct relation to the ExternalVolumes* keys but I was unable to find a reference to the actual file it points to using Hopper. Calling upon Mike Lynn’s notorious (and some would say legendary) Python skills resulted in him whipping up this code which uses very clever PyObjc calls to determine the value of the variable kMDSPreferencesName - in this case /Library/Preferences/com.apple.SpotlightServer.plist. The exercise of finding this information inspired Mike to write up a more generic post on how to use the methods in this bit of code to get the kind of info I was looking for, so keep an eye on his blog for that.

Back to our quest for the preference file to test our preference keys. Now that we know its name and location we can do some testing with it. By default /Library/Preferences/com.apple.SpotlightServer.plist does not exist, so we need to create it. The quickest way to do this is to use defaults on the command line. The following will simultaneously create /Library/Preferences/com.apple.SpotlightServer.plist and write the ExternalVolumesIgnore boolean “True” key:

Or if we want to let the user opt in some external volumes at a later time if desired:

Now when we mount a network volume we should see some logging in /var/log/system.log that indicates the volume is not being indexed:

Success! Now mds is ignoring this and all other external volumes entirely and not indexing them, exactly what we were looking for.

To make testing this in other environments easier I am providing two profiles that set either the ExternalVolumesIgnore or ExternalVolumesDefaultOff key for deployment. Remember: test, test and then test again!