Since I still had Hopper open with Setup Assistant to confirm something for Rich Trouton related to Setup Assistant skipping Diagnostics and iCloud Setup skipping it was a quick trip back to Hopper to look for traces related to Wifi-skipping behavior. My general approach with Hopper as mentioned in previous posts is to do a simple string-based search for possible hits on terms related to the question at hand. In this case I started with the logical “Wifi” query and it didn’t take long to find something rather promising-sounding. 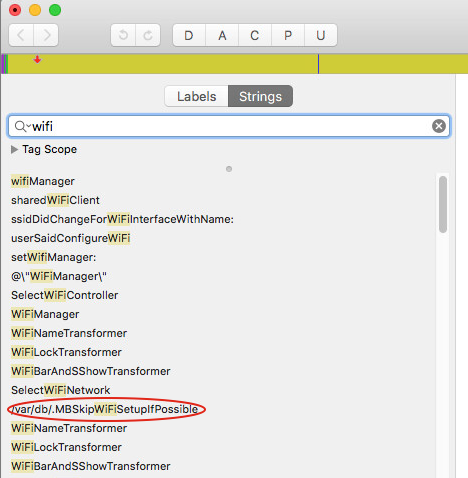 The path /var/db/.MBSkipWiFiSetupIfPossible makes sense as Apple uses hidden trigger files in /var/db regularly for various early-boot purposes like .AppleSetupDone as well as other lesser-known ones that manage DEP and MDM setup processes. Looking at the (awesome) pseudo-code that Hopper will generate for blocks of assembly code offers a pretty easy to follow logic flow in this case:

To break it down, the r12 placeholder variable that Hopper uses when generating the pseudo-code holds the result of a function called fileExistsAtPath which takes a string containing a path to check. The use of the verb “exists” means it likely returns a boolean True or False or the equivalent integers 1 or 0. Later in the code and after a few other Wifi-related operations an if statement checks for two conditions. We’ll ignore the left-hand side of the || (or) logical operator side and pay attention to the right-hand side condition: r12 != 0x0:

This comparison will return True if the value of r12 is not 0. As we recall, at this point in the pseudo-code r12 holds the result of checking whether or not the file .MBSkipWiFiSetupIfPossible at the path /var/db exists. As comparison with the value of r12 uses 0x0 we can now assume that the fileExistsAtPath functions returns 1 if /var/db/.MBSkipWiFiSetupIfPossible exists. Since r12 will be 1 if the path exists and 1 is not equal to 0 the result of the if statement is True and the corresponding code is executed:

This operation pushes the value CloudConfigurationWelcome onto the rbx register which is one of the standard x86 registers called the Base register. In effect this causes Setup Assistant to go the “Welcome” screen instead of the Wifi setup screen. Thrilling stuff, agreed.

TL;DR: If the trigger file /var/db/.MBSkipWiFiSetupIfPossible is found on disk this code tells Setup Assistant to go directly to the “Welcome” screen and to skip the SelectWiFiNetwork pane if Airport hardware was found or to skip the HowDoYouConnect pane if no networking devices were found at all.

These findings didn’t remain theoretical for very long as “tuxudo”, the user who asked the question reported back the next day and confirmed that the Setup Assistant behavior is indeed as expected with the trigger file in place. His post on the topic can be found here. Great success!

To deploy the trigger file in a workflow and skip the Wifi setup window one approach could be a payload-free package as created with munkipkg. This package might contain a postinstall script that runs touch /var/db/.MBSkipWiFiSetupIfPossible (with some possible error checking to be safe) as part of pre-boot configuration with tools like AutoDMG, Imagr or DeployStudio. The only caveat is that a working Wifi profile must have been installed prior to Setup Assistant running (h/t tuxudo). This can be done by placing such a profile in /var/db/ConfigurationProfies/Setup and deleting /var/db/ConfigurationProfies/Setup/.profileSetupDone which will trigger an automatic installation at boot time. The aforementioned tools can be used to install the profile and remove the trigger file to prime the profile’s installation.